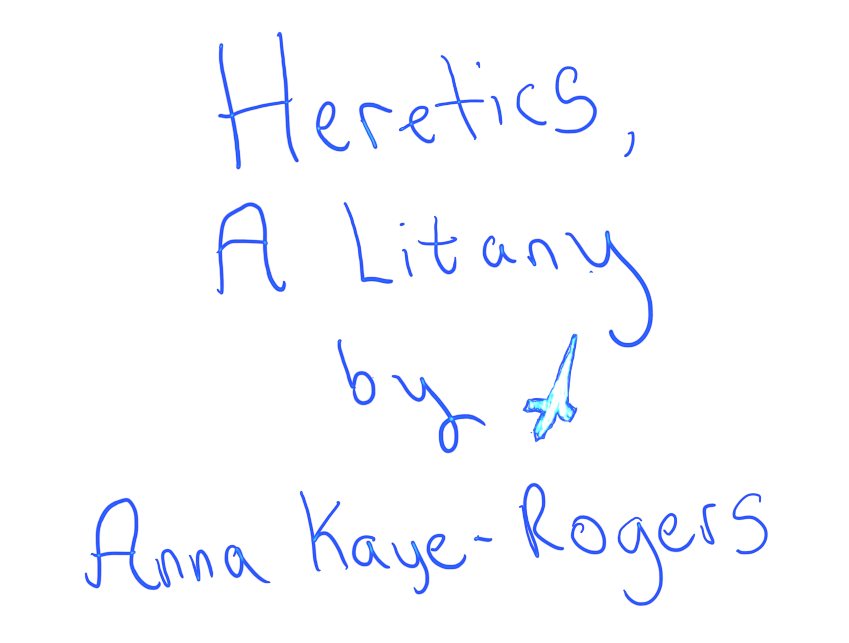 Heretics, a Litany by Anna Kaye-Rogers

They made the Patron Saint of Soldiers a woman, even as they wrapped us in headdresses for modesty to play-act the Stations of the Cross. How many golden goblets did our soldiers steal in the Crusades? She glimmers in steel and chainmail, wielding a sword, and they burned her at the stake. The heavy incense at Benediction smolders in my lungs and I long for an inhaler; St. Joan, pray for us.

They froze St. Lucy in time, a martyr turned to stone–the girl who would not be moved to be with the Lord. We strained against corsets and taught ourselves to read; it was not a crime to avoid an unwanted marriage to a stranger. They killed her anyway. “Stand strong for your faith,” the lesson they taught us, but we wanted to move for ourselves. Catholics throw heavy stones at stained-glass houses, our women put others first in the name of the Lord. Medusa attacked those who wronged her with vengeance and brimstone but good Catholic girls wait to be saved. We are sacrifices, somebody else’s mothers and daughters, when all we want is to stand on our own, always enough; St. Lucy, pray for us.

The Queen of Poland chose her country over love and we cheered her selflessness, instead of questioning why she could not have both. She married a Pagan and promised to change him. We use our women like pawns on the chessboard; the Queen is the strongest piece but we harness her to the King. Only he matters, she alone cannot win. We sacrifice her to shield his crown; the world becomes black and white. She died childless and no one recorded if she felt happy when they struck her piece from the board, if the bishops closing in appreciated all she had done for them; St. Hedwig, pray for us.

St. Clare came to Francis and the Catechism called him her father figure; we all assumed it was god she loved most. What of the long days she suffered in hard labor, feeling guilt and shame for a secret held dear, what if she longed for the hours spent at Mass where she could hear his voice and see him; what if it was not god who called her after all, but a more human kind of love. We speak of her simple life and her devout unshakeness, as though an eighteen-year-old girl can be sanded down in penance shirts and straw beds until there is nothing but her faith left, as if she has never longed for love or family or womanhood at all. We honor her for being the exception to the rule, but her pureness in spirit would be far more impressive if it came at a cost. She had no money to pay it and so they took the rest away, only leaving behind a devoted acolyte who learned from others, the second name in a bonded pair; St. Clare, pray for us.

Elizabeth Seton lost her husband to blood-filled lungs, each cough a divine intervention, but rather than attend his vigil beside her we proclaim how great the lord is to kill him after he’d begun to love our god. She founded schools and took her vows and no one taught us she had five children of her own; if those children felt abandoned and unloved because all the books that mentioned their mother never thought to include them. Women today raise their hands at conferences and ask how to balance family and career; the god of my saints never remembers to mention what happens to the babies belonging to those he’s called; if it is them or their parents who sacrifice the most after all. Girls need their mothers but we can’t always get them, St. Elizabeth, pray for us.

They murdered St. Agnes to keep her pure; we signed our chastity pledges with store-bought ink and the blood of a virgin’s sacrifice. We promised to be brides of Christ and they painted us with lambs, for a married woman cannot commit adultery without being burned at the stake. The girls who sneak off to trees at the high school bonfires are called whores and judged, they have cheated on their true husband the church, for who can refuse to sign away their life when everyone else is watching? If we had truly been listening we would have seen Agnes sacrificed for what she believed in, too young to be forced into a decision, and we would have ripped up those cards and thrown them in their faces. For they saw themselves like Agnes when they were more like the men condemning her to die, for being not like them. They prayed over us like wolves counting sheep, each a gold-plated gem for the Lord’s crown they had buffed all the flaws and imperfections from. We cracked from within and they did not notice, only Agnes stayed pure, and we wondered if it was because she never lived long enough to be tempted. They keep us perfect until they can no longer pretend, and then we never existed at all; St. Agnes pray for us.

They implied St. Cecilia never consummated her marriage; that even when the rules are followed women are left waiting still for a seat at the table, an equality that never comes. We are not allowed to love anyone more than god, and if we are lured away by a real love our fate has been sealed. We can feel and see and touch; a love that answers in text messages and packages wrapped on Christmas day, strong arms wrapped reassuringly around us when our prayers go silent and unanswered, when men who have never met us write letters to reassure those faithful that they know better than us. We are told to turn away from the real men who see us as people to those who know we are vessels, that the life we can provide for them is our price of passage to walk beside them into the pews and pretend we are equal to accept his body and blood. All male priests, all male deacons; if the singer is too loud we roll our eyes and make fun of her performance, as if she is the only one draped in importance. The Lady of the Lake brought a sword from the waters to free a country; when I dip my fingers in the holy water no pen to sign laws protecting my body appears to me. They will pierce my hymen with an ultrasound wand; their way of life is the tithe I am required to pay. If I am happy now I will burn in hell forever, if I live according to them there is no proof the afterlife has prepared a safe space for me. The only good Catholic woman is a dead one, I should be more like the silent statues we lay flowers before; St. Cecilia will not pray for me; I want no prayers for myself.

Anna Kaye-Rogers is a recovering Catholic in the Illinois Valley. Her favorite pieces have been published in The HCE Review, The Nasiona, Cosmonauts Avenue, and The Stirling Spoon.